Continuing on the line of best oud perfumes on Fragrancespotter.com, we take a closer look at Creed Royal Oud. This is one of the best Creed colognes for men and it might be worn by women, even if it would be a bit difficult to pull off by a younger lady.

This perfume was released a decade ago and in 10 years, no other perfume for men got even close when it comes to the uniqueness of the formulation.

As you might have heard, a bottle of Creed Royal oud can cost up to $400, which makes it a select choice people usually save up for. Unlike 99% of other expensive fragrances, men who purchase them rarely regret their choice. 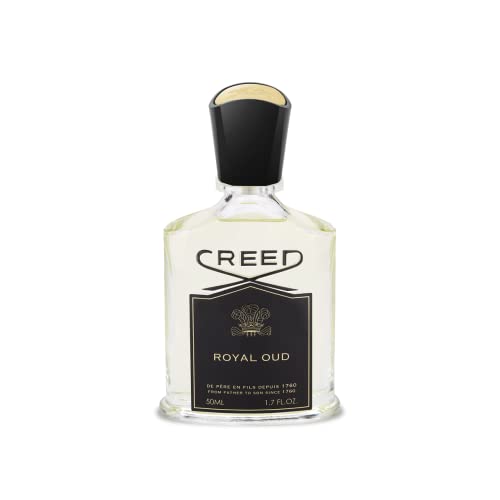 Royal Oud perfume from Creed is an uncomplicated formulation in terms of notes. It features pink pepper in the opening. This note is very potent and it sits with you for a few hours. Lemon and spicy bergamot complete its citrusy opening accords, highly specific to the house of Creed.

Angelica is the main note of the mid accords. Angelica smells floral with earthy and wood-shaving undertones that is simply superbly interpreted here.

Galbanum is also there in the heart notes but to a lesser extent.

Starting from the mid notes and making its way until the fragrance fades away, sandalwood also adds a bit of spice to the perfume.

Oud and musk are also there in the base accords.

This is where the perfumery experience of Creed shines the most. Many new perfumes with oud and musk simply smell too heavy and even off-putting to some. But this is certainly not applicable to Royal Oud.

Some of the main impressions on Royal Oud notes

After sniffing this cologne for men for hours, it’s clear some notes are better than others, and they might just be natural.

The changing faces of the angelica note are what makes this perfume smell so good. For men and even for women, angelica can be hard to comprehend as it smells a bit differently depending on its region.

But on some hot days, the angelica note can even turn herbal, which is always a plus when it comes to the complexity of this fragrance.

Angelica is at least as good as the oud note in this perfume when it comes to skillful interpretation.

The oud here is among the few that tends to attract compliments. You might not know it yet, but wearing this cologne is going to draw a lot of positive attention.

Many associates the oud here with an expensive perfume, which is certainly correct. But it would take ages for people to guess what cologne you are wearing since this perfume for men is quite uncommon on the streets.

One place where you can smell it is at fancy events, typically with a formal dress code.

Where the fragrance shines the most

Lasting around 10 hours on the skin, this perfume is worth the money. You will smell good all day. Most importantly, it’s going to become your signature scent as it seems you can’t get enough of the smell, mainly through its friendly oud note interpretation.

Apart from the very hot summer months, this fragrance can be worn in confidence. It shows an interesting side in the winter when it’s creamy and comforting in the winter.

Who can wear Creed Royal Oud?

Men can wear Creed Royal Oud. There’s a way for women to wear it as well if they like the scent and its notes.

The fragrance is highly masculine in the opening, mainly similar to Sauvage. But it turns creamy in the drydown where angelica’s floral interpretation with the oud makes any woman smell good.

Then there’s the sandalwood perfume note that almost all women love, alongside the smell of oud. This gives it a slightly aromatic nature which takes over the fading pepper note from the opening.

Now let’s address the elephant in the room, its price. Sure, good colognes for men are expensive. But then, this is the case with the entire house of Creed perfumes.

My tip is to seek out the 50ml Creed Royal Oud. It shouldn’t cost more than $200. Test it out for a month, see how you like it, and appreciate how people react to it. You can take it from there and decide if you want to invest in its 75ml or 100ml bottle in the future.

Sure, for the 100ml Creed Royal Oud, the price is a bit high. You can get very good oud colognes for men and women at a lower price.

At the same time, there’s always that feeling ‘yes, but it’s not Creed’. If you know you love oud, especially of a mild simpler interpretation, you owe it to yourself to at least order a fragrance sample to see what can be done when perfumery is close to the artwork.

As a final tip, this perfume exudes some form of maturity through its lack of extreme opulence specific to many cheap men’s colognes. Furthermore, it also has oud in it. Both of these reasons slightly push us to see Royal Oud as a men’s cologne for those over 30. Yes, you will find it smells expensive as a 20-year old guy, but you will struggle to fully appreciate it at this stage of your life.

Aventus is the king of Creed but Royal Oud is the right choice if you favor oud colognes. These fragrances aren’t mutually exclusive and you can use both as well.

Creed Royal Oud tends to shine in the fall and winter months. Creed Millesime tends to be better during the summer. These fragrances complete each other correctly. You can invest in both if you are a Creed fan.

Fresh, citrusy, and herbal, Viking is different to Royal Oud. For versatility purposes, men can choose Creed Viking instead of Creed Royal Oud.