In popular belief, ‘cologne’ refers to ‘perfume for men’ while ‘perfume’ is the term that describes ‘scents for women’.

If you’re unsure about the differences and similarities between cologne and perfume, you can start with their official definition.

Perfume – the scent of something sweet-smelling; a substance that emits a pleasant odor (Meriam-Webster)

Since the word ‘sweet’ has made its way into the definition of perfume, many assume perfume is exclusive to women. To an extent, this is true. Let’s see why.

Difference between cologne and perfume – more than English terms

You might first think there is no difference between cologne and perfume, but parfumeurs see them differently. The funny part is that even if cologne is a European term, it’s only used in North America.

Cologne is offered referred to as the oldest name for perfumes in North America. It’s the short version of Eau De Cologne (French name). The name of the perfume comes from the German city of Koln, where cologne was first made by dissolving rosemary and citruses in wine.

Perfume is known for a high concentration of fragrance oils (or essential oils), typically between 14% and 40%, the rest of the juice being perfume alcohol. You can recognize perfume by its thick oily nature, especially when compared to cologne.

The name ‘perfume” comes from the Latin ‘per fumum’ which translates as ‘through smoke’. If cologne was recognized for citruses and rosemary, perfume was initially known for herbs and spices as flower notes were not part of the initial wave of perfume making.

Both cologne and perfume are 2 sides of the same coin

Cologne and perfume might have different concentrations, but they are made out of the same notes. The main difference is in concentration which finally impacts how long these 2 scents last on the skin.

The more concentration a perfume has, the higher its longevity is. The least concentrated a perfume is the likelier it is to be called ‘cologne’.

How cologne and perfume are made using the same methods

The most volatile molecules are those of the top notes. While these molecules or notes evaporate within minutes once applied to the skin, they also offer the first impression of the perfume.

Mid notes can appear within minutes after the top notes. Some mid notes take up to an hour to make their way to the nose.

Base notes appear the last since they’re based on large molecules which take longer to evaporate. In colognes and perfumes, base notes are used to bind the top and the middle notes, offering longevity to the composition.

It was the Persian Avicenna (a philosopher born around the year 980) that first introduced distillation and gave a new meaning to perfumery. This is a method of extracting oils from flowers and herbs, a method which is still at the core of cologne and perfume-making today.

Does cologne ‘feel’ different that perfume?

One of the questions I often get when being asked about cologne vs. perfumes is if they feel any different on the skin. While perfume is a bit oilier, most people won’t be able to tell a difference apart from longevity and projection.

Both affect emotion which has often been linked to the world of perfumery. As seen many times on fragrancespotter.com fragrance reviews, it’s certain perfumes that manage to trigger certain memories. The difference between cologne and perfumes also involves a stronger impact on this trigger.

In the book Neurobiology of Sensation and Reward (Gottfried J.A.) links both trauma and joyful memories among the effects of perfume. Judging from this perspective, perfume is more intense and more likely than cologne to send you back to certain memories or experiences.

What is Eau de Toilette?

Eau de Toilette has a concentration of fragrance oils between 5% and 15%. Its longevity is slightly shorter than on perfume but it still reaches up to 4-5 hours in some cases.

Aftershave is dilute even further than cologne. As its name suggests, it’s used for shaving and it contains the smallest perfume concentration.

Perfume extract is an even more potent concentration than perfume but it’s almost impossible to wear due to its potency. 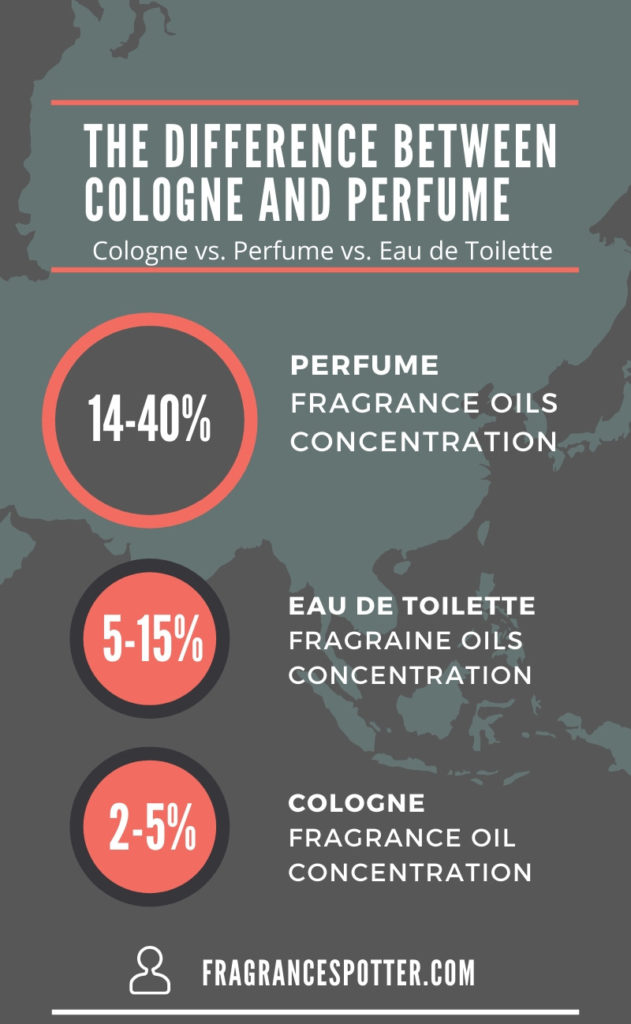 The difference between cologne and perfume can go on with a detailed representation of how concentrations are added to create perfume. But I’ve already covered this topic in my previous post on fragrancespotter.com. As a result, we’re going to look at very popular examples of cologne and perfumes to make sense of all this theory.

Often seen as the most popular cologne, Creed Aventus Cologne is the modern interpretation of the popular Creed Aventus. To understand the difference between perfume and cologne, you can take a quick look at these 2 versions of the same DNA.

Creed Aventus – is an aromatic Fougère, the perfume is fruity and leathery in the drydown. Apple, pineapple, blackcurrant, and bergamot are there in the opening followed by juniper berries, birch, patchouli, and jasmine. Vanilla, musk and oakmoss complete this daring composition.

For the full scent experience, perfume concentration comes with the best longevity and with the biggest impact. One of my favorites, Dior Homme Parfum has been discontinued, but even when it was available in stores, it was labeled as ‘too strong’ as most people use lesser concentrations such as Eau de Cologe or Eau de Toilette.

Dior Homme Parfum is an interesting option in the Parfum concentration. It’s now back with a new 2020 version but both its new and its old version is very potent.

Why do I know this? I own the perfume and I know it lasts on the skin for 2 days. Here’s another experiment you can try if you own this perfume concentration to compare it against cologne and Eau the toilette. Spray a piece of paper, put it in your wallet, and come back to it after 2 weeks. I’ll bet your piece of paper still smells like perfume after 14 days.

Is perfume better than cologne? 3 variables to consider

When deciding among these types of perfume, you should know exactly what to expect to save your money and invest wisely.

One thing to remember about these cologne vs. perfume vs eau de toilette debates is that they react very differently when worn on the skin.

You can expect your citrusy cologne to be impacted by the heat of the sun the fastest. I’d say it will probably fade away within an hour if you stand outdoors in the sunlight wearing cologne.

Perfume is going to react differently. Yes, it also fades away quicker in the sun (around 2 hours for complete evaporation), but it becomes animalic. Perfume concentration is not made to be worn in the sun, where it starts acting weird. It might be why I get the best perfume concentration fragrance wear in the evening or early in the morning.

Remember that if you’re pondering your perfume choices, it’s something you should try out yourself. It may take some practice to find your perspective but there are ways to shortcut your efforts and research into something you can wear every day.

Regardless if you’re looking for men’s perfumes of perfume for women, you can test out these concentrations in your local department stores.

Here’s how I test perfumes in stores. I buy a large hot black coffee and I walk into a fragrance store. It’s here that I smell different compositions and different concentrations.

Whenever you move on to the next perfume, you simply smell the coffee to reset your smell or nose into a default state as smelling too many perfumes is going to give you nausea. I’d limit my quest to 4-5 perfumes at a time to properly take them in and understand them.

The way others perceive cologne and perfume can be different and depending on their notes, those around you can like or dislike a perfume regardless of its concentration.

It’s best to test out various opinions but you should know that over spraying perfume of any concentration can be a turn off in many cases. Test out both cologne and perfume variations on your skin and see how people react.

Final considerations on the difference between cologne and perfume

Of course, all of the above is just perfume theory and perfume history. You may want to test everything on your own. Perfume is an art and we all know art is subjective. If you can make the time and go through the effort of learning these compositions, you are one step closer to finding what you like the most.

For me, it’s never about a single type of concentration. I won perfume concentration fragrances for occasions and nighttime wear. I wear Eau de Toilette perfumes every day when I simply spray them on my skin without thinking too much about them. You may as well need to learn how to balance these types of fragrances on your own.