Myrrh has a resinous smell with aromatic medicinal-like undertones. It’s is a smoky aromatic smell that can be either sweet or bitter depending on the region it comes from. The smell of myrrh best resembles the smell of frankincense.

Commiphora erythraea is the tree that produces myrrh as tree bark sap. The tree is native to America, Africa, and Asia. Its sap is collected and turned into essential oil for myrrh that is used in perfumery or burnt as it is for liturgical religious practices. Myrrh has been mentioned in the Bible among the gifts of the Three Wise Men.

Myrrh smells like a woody aromatic resin. It has a medicinal smell that is typically sweet, smoky, and astringent. Myrrh has a spicy quality to its smell, unlike other resins which means it’s a cooling scent even when smelt in high heat.

Myrrh first smells resinous. This scent is influenced by its tree sap-like texture. A resin smell can have many differentiations and myrrh is no exception. It can smell either like a sweet resin or a bitter resin depending on its harvesting time and on its habitat.

The woody smell of myrrh is highly distinct. This is a highly aromatic wood (similar to other aromatic woods such as sandalwood). Its aroma is complex and often associated with religious rites. As a result, myrrh is also used in aromatherapy in candles or in perfumery to make scents smell aromatic. Its aroma is sometimes used to flavor various traditional dishes.

Often associated with burning myrrh, the smell of myrrh is smoky in itself even without burning. This incense-like smoky scent blends with its woody undertone to create a unique smell that’s highly complex.

Myrrh also smells astringent or poignant. Its cloying smell can become overbearing and this is why myrrh has been used in embalmment traditions in the past. Myrrh’s astringent smell tends to overpower other smells when mixed with other aromas.

Generally sourced from Asia, myrrh has a spicy nature to its smell. It almost feels like it contains pepper, unlike other spicy woods such as sandalwood which isn’t as peppery. The spicy myrrh scent tends to liven up other ingredients when myrrh is mixed with other essential oils in colognes.

A small amount of myrrh can smell very potent. Its aromatic nature means this resin is highly concentrated. This is why a small amount or a dab of myrrh is burnt in religious rites as the smoke created by burning myrrh lingers on for minutes and hours when burnt indoors.

The resinous smell of myrrh is warm. Both sweet and bitter myrrh has an inviting warmth to their scent. This quality is specific to Middle Eastern perfumery and aromatherapy.

Myrrh has a cooling scent. This cooling smell is similar to the smell of frankincense. Myrrh tends to cool down a fragrance or an ambiance through its smell, much like mint. This is why people living in arid Asian regions burn myrrh to cool down and drink mint tea to cool down as well.

Myrrh vs Frankincense – What’s the difference

Myrrh isn’t as sweet or fruity as frankincense which means their uses are similar but different. Myrrh is more aromatic and a bit more medicinal-like than frankincense. Today, frankincense is used in liturgical practices due to its wider appeal and reduced medicinal smell profile. Myrrh is used in perfumery where it adds depth and a cooling factor to a fragrance, particularly to perfume for the summer. 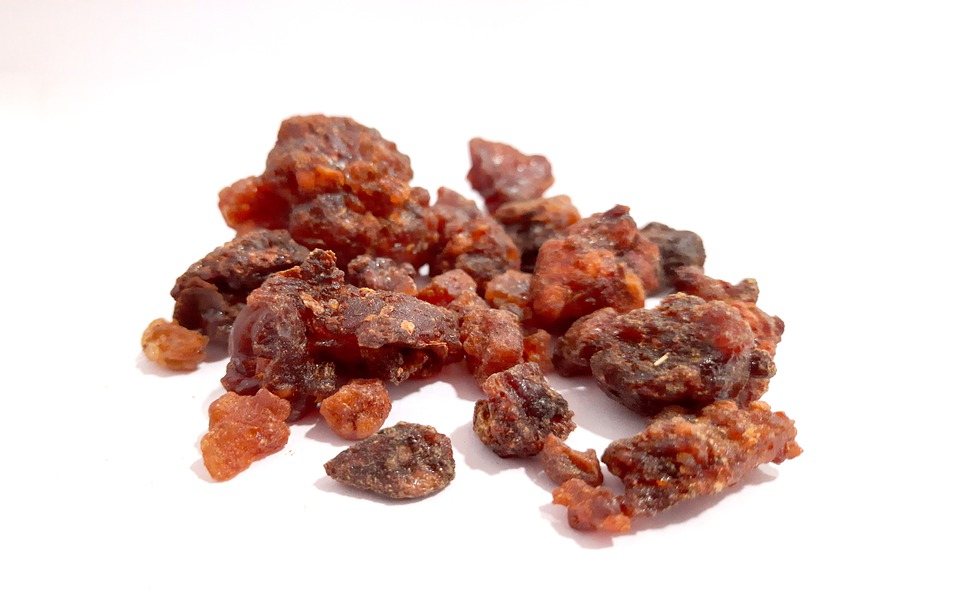 Myrrh smells pleasant, like a sweet aromatic smoky resin. It resembles incense which has a cooling effect. Its smell is particularly nice for those who like the smell of incense typically associated with religious rituals.

Is myrrh the same as frankincense?

Myrrh is not the same as frankincense. Both are resins collected from the bark of trees as sap. Myrrh is a bit more astringent and medicinal while frankincense is sweeter. Both come from different types of trees.

Does myrrh smell bad or burnt?

There are two types of myrrh. Sweet myrrh is used in aromatherapy while bitter myrrh is not used in perfumery or aromatherapy as it tends to smell off-putting, similar to burnt rubber.

Myrrh is a resin formed from Commiphora tree sap. It has an aromatherapy role and it can smell either sweet or bitter. Sweet myrrh is used in perfumery and religious practices as it’s pleasant and it burns easily and for a long time, typical of hardened tree sap.

There are 2 types of myrrh. Sweet myrrh and bitter myrrh both come from the Commiphora tree. The sap-like substance is collected from the bark of trees.

Myrrh uses include an aromatic role as an essential oil in fragrances. Myrrh is also used as a fixative in hair cosmetics. Oriental dishes are often made with added myrrh as a flavoring.

Myrrh has also been used for embalming as it suppresses all other smells.

The intriguing mysterious scent of myrrh has a very interesting history. Made from the tree of Commiphora, myrrh is a sap native to the Middle East and Northern African countries such as Ethiopia. Now, not all types of myrrh smell the same. Some believe Ethiopian myrrh is more aromatic but a bit muted and better suited for essential oils, aromatherapy, or perfumes.

The origin of the name also shows more about the smell of myrrh than you may expect.

The term ‘myrrh’ is used in Greek Mythology as ‘Myrrha’ (mother of Adonis).

The term ‘muron’ of Greek origin is the term used to describe myrrh as a perfume as it made its way to the English language.

These terms tell us myrrh is a natural gum or resin from a thorny tree with a bitter aroma. Its ties to religion are obvious from the start as well.

Today, both myrrh and frankincense are widely used in perfumes and it won’t go away anytime soon due to its unique aroma.

Myrrh smells pleasant, like a sweet aromatic smoky resin. It resembles incense which has a cooling effect. Its smell is particularly nice for those who like the smell of incense typically associated with religious rituals.

Is myrrh the same as frankincense?

Myrrh is not the same as frankincense. Both are resins collected from the bark of trees as sap. Myrrh is a bit more astringent and medicinal while frankincense is sweeter. Both come from different types of trees.

Does myrrh smell bad or burnt?

There are two types of myrrh. Sweet myrrh is used in aromatherapy while bitter myrrh is not used in perfumery or aromatherapy as it tends to smell off-putting, similar to burnt rubber.

Both sweet and bitter myrrh interpretations are tied to the perfumes you can use today. On fragrancespotter.com, we talk fragrances. This is why I’ve selected the best myrrh perfumes for you to enjoy throughout the year.